Browser Wars: The Rules Are Being Rewritten, With Advertisers Caught In The Middle

As featured on AdExchanger

“Data-Driven Thinking” is written by members of the media community and contains fresh ideas on the digital revolution in media.

Today's column is written by Harry Kargman, founder and CEO at Kargo. 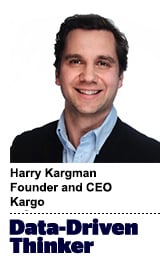 The advertising industry is facing sweeping and unprecedented changes, where user targeting is being challenged with extinction. We need to accept the fact that the cookie is endangered and will probably go away over the next 12 months.

I also predict, although not yet formally announced, that device-based identity, including Apple IDFAs, Google Android IDs and other mobile application identifiers are endangered for advertising purposes. Imagine a world where the screen is anonymized and the customer data platform’s value is diminished as targeting goes away.

The reason for these changes is not due to regulation, although regulation is coming, but the result of Apple and Google forcing technical modifications to their hardware and operating systems. It is Apple and Google that are now determining the “public good” and the rules for privacy, dragging the advertising industry into a state of disruption.

Apple and Google are locked in combat over adoption of their browsers and fighting to win the hearts and minds of consumers. To differentiate, Apple has gone all-in on developing a privacy-first approach as one way to win adoption of its browser.

Apple is writing its own regulatory rules for our industry and all the affluent consumers who own its devices. It is dictating how advertising should work and has little to lose since it is not a big advertising player. Most astonishingly, it has commanded compliance to its policies by baking them into the iOS operating system with no ability to allow for alternative targeting or consumer choice. Apple is strategically breaking advertisers' capability to identify consumers on Apple devices, rendering the user data useless.

This is one of the largest unilateral moves that the industry has experienced, yet we are in the dark about its long-term effects. Apple has carved out a position beyond the California Consumer Privacy Act as consumers are locked into Apple’s policy upon purchase of their devices. Fundamentally, it is imposing its own laws on advertising and taking away consumers’ right to opt in to targeted advertising.

Apple has not enforced similar draconian requirements in its app ecosystem. There are rumblings of similar changes coming, but as of today, these changes have not yet occurred and device ID-level targeting continues to work. Perhaps Apple is concerned about dismantling one of the major reasons app developers continue to develop apps for iOS: to make money from advertising. Without device ID, there could be widespread divestiture of the Apple iOS application platform.

What I believe to be the most valuable consumer platform of affluent Americans – the iPhone – is effectively dark to cookie-based targeted advertising. Not reaching iPhone users is a non-starter as a marketing strategy.

So, where does this leave us? The foundation of the current advertising economy, based upon user-targeting, is crumbling, and yet there are few conversations about a solution forward.

We need to start adapting to this changing landscape, and that starts with an open conversation about our future – as well as testing and learning – within this new reality.